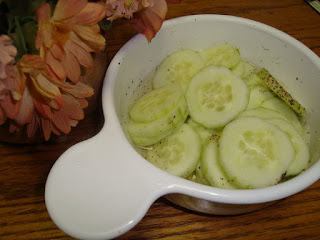 I love my father's cucumber salad but this one is only a quick and simple recipe for you to try if you want some cucumber slices for dinner. I like it sweet and sour. It is like the pickled cucumbers but not too salty. All you have to prepare are the following: 1 cucumber, sugar, salt, black ground pepper and vinegar. I usually put more sugar than salt and lots of black pepper. For the vinegar, you may add it just enough to cover the slices. For cup of vinegar, I put a tablespoon of sugar, 1/4 tbsp of salt and a dash of pepper. Mix and add the cucumber slices. You may add more sugar or salt to satisfy your taste. Also, I like it with tomatoes, onions, chili pepper and green onions, just like how my father prepares it.
Posted by Felicity at 11:42 AM 1 comment: 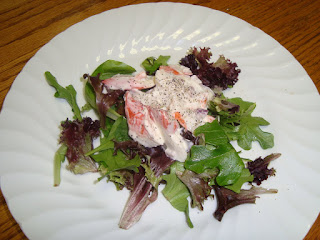 Originally, this is a recipe from Trans-Ocean Products: Crab Classic Salad with Asparagus. I omitted the asparagus so it is only a simple Crab Classic salad Recipe. This is healthy and delicious. It tastes good with mixed greens. If you want to add asparagus, just simply follow the recipe below. 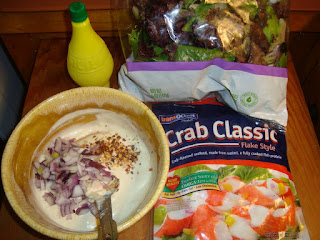 Combine mayonnaise and lemon juice in a bowl and mix well; add red onion and red pepper flakes. Fold in Crab Classic and toss; season to taste with salt and pepper. Place 1 cup of greens on a salad plate and scoop about 1 cup of crab salad on top;you may lay 3 asparagus spears over salad if you want and serve.
Posted by Felicity at 12:13 AM 1 comment: 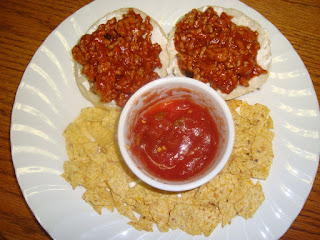 Hubby came home late one night and I was really starving. I waited for him because we always eat dinner together. I told him that I wanted to eat a meal which was easy and quick to prepare. So I checked our pantry and grabbed a can of sloppy joe sauce. It was a good timing because we had just defrosted a ground turkey meat. So I cooked the turkey and stirred in the sloppy joe sauce. It smelled so good and I can't wait to eat. Meanwhile, hubby baked some Pillsbury biscuits, the flaky kind. When it was done, we topped it with the sloppy joe and served it with tortilla chips and salsa. It was tasty and yummy! What a good meal.
Posted by Felicity at 11:59 PM No comments:

This is a Sponsored Post written by me on behalf of 20th Century Fox. All opinions are 100% mine.

Steve Carell and Tina Fey was on Oprah last night and promoting their Date Night Movie. It is about bored suburban couple played by them who went on their weekly dinner date and found themselves thrown into a night of intrigue: there’s breaking and entering, a car chase, a shootout and a showdown with an underworld boss at a strip club. A thriller was shown at Oprah and it was really funny and thrilling too. This movie is a case of mistaken identity because they claimed to be somebody just to get that reservation at the restaurant. They didn't know that the couple they played as them were chased by a group of certain people. Steve and Tina in this movie, as husband and wife, came out of the adventure with some scratches and also with their ardor renewed. You should view the trailer and see the movie on opening weekend. If you have seen Oprah last night, you will surely laugh at loud at some of their scenes and takes shown on TV. Tina was so funny when she was dubbing the other couple who were eating in the restaurant. She was just making up a conversation with Steve as if that was what the other couple were talking about. Also, the pole dancing was hilarious. They really are the perfect couple for this movie. I couldn't wait to see the this. So don't forget on April 9th, 2010, watch the Date Night Movie. It's a date! 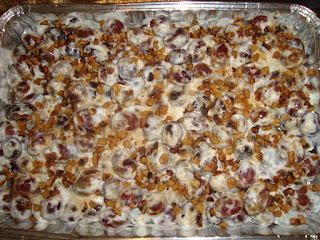 My friend, Juana Adams, brought a dish one time when we had a gathering. She called it Grape Salad. I haven't seen or tried it before so I was curious about it. I asked her then on how she prepared it. It looked good and I was pretty sure it tasted good too. Indeed it was! It has different flavors: some grapes were a bit sour which I liked. It has sweet crunchy nuts and sweet cream. Below is the recipe she got but she modified it. Enjoy!


2 lbs green grapes (use all red grapes if you want it all sweet)
2 lbs red grapes (smaller rounder not the oval shape ones)
1 - 8 oz cream cheese, softened (you may use 1/3 less fat cream cheese)
1 - 8 sour cream (you may use 6 oz fat free vanilla yogurt Albertsons brand)
1/2 cup white sugar (you may use Splenda for baking. You can get the big bags at Costco)
1 tsp vanilla extract(you may add extra 1 tsp)


(Don't put the toppings before chilling because it gets watery the next day due to sugar that melts overnight. So sprinkle them 1-2 hrs before serving.)
Posted by Felicity at 11:20 AM No comments: