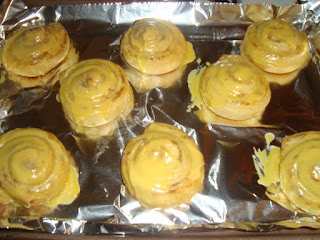 This is the first time I tried baking and eating Orange Cinnamon Buns. I don't like cinnamon much but hubby loves it. So I bake cinnamon rolls and buns for hubby. I do eat but not really a big fun. But with this kind, orange cinnamon buns are really good. I can't taste the cinnamon well so I like it. It even smells so good. I would bake these buns again with orange frosting, I like it better than the regular ones. Try it too!